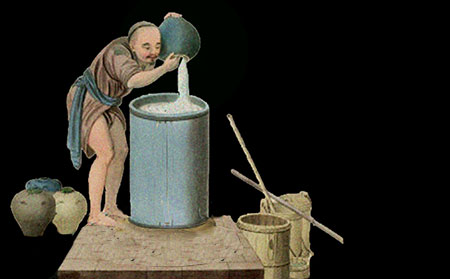 Sometime in the 7th century, while making dough from wheat flour in a tub of cold water, some monks in China noticed that the more they kneaded, the more the starches dissipated. What remained was a chewy wheat gluten rich in protein that could be simmered in a seasoned broth in order to provide it flavor. The monks named the dish Mien Ching or Buddha’s Food.

Eventually, Mien Ching made its way to Japan where chefs adapted the product by flavoring it with shoyu, kombu and ginger into what they called Fu, or what Macrobiotics founder George Oshawa would later name Seitan.

In the late 1970’s Seattle Chef David Lee decided to add a European flavor-profile to his homemade Seitan, and later sold the product under the name Field Roast. Today his company crafts a broad selection of modestly-seasoned, well-textured grain meat products. In a small bowl mix 1/2 cup of organic tomato paste with two tablespoons each of olive oil and aged balsamic vinegar plus one of maple syrup. Add a touch of sea salt, a pinch of nutmeg, and some fresh ground black pepper. Mix well.

In a dry cast-iron pan simmer one red-pepper and one red onion until they become nicely aromatic. Add two tablespoons of olive oil and two cups of crumbled Fieldroast Grain Meat Sausage. Stir and simmer a couple of minutes until the grain meat begins to lose some of its moisture and darken in color.

Add two or three cloves of thinly sliced garlic to the pan with about a cup of chopped olives, plus a couple of dozen non-pareil capers finely minced. Toss in a handful or two of broccoli florets, a cup of sliced mushrooms, a handful of minced fresh garden herbs such as sage, parsley, thyme, and marjoram. * In the sloppy version pictured above I even added a couple ounces of canned garbanzo beans and a carrot.

Add a splash or two of balsamic vinegar to the pan, cover, and turn off the flame. Shake the pan around a bit and then just let it sit there on the stove for a minute or two so that those lovely fresh herbs are softened by the steam.

Meanwhile, smear the lightly-gilded pizza crusts with the seasoned tomato paste and sprinkle with some dry-aged cheese such as peccorino, parmesano reggiano, or grana padano. You dont have to overdo the aged cheese, just a handful spread out evenly will suffice. Now spread the contents of the pan evenly over the parmesan-sprinkled tomato paste and top with slightly too much mozzerella or some other moist melting cheese.

Bake for about ten minutes or so until the mozzerella is fully melted and lightly browned. Serve with an arugala salad dressed simply in balsamic vinegar, olive oil, salt and cracked black pepper. 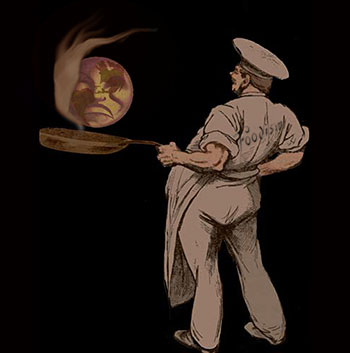