Squid are fascinating creatures in every way. The plasticky feather-shaped structure inside each squid is not something it swallowed. It is a sort of proto-backbone called its “pen” that  allows the squid to flows smoothly through the ocean and niot just bob around like a baggie filled with toothpaste. 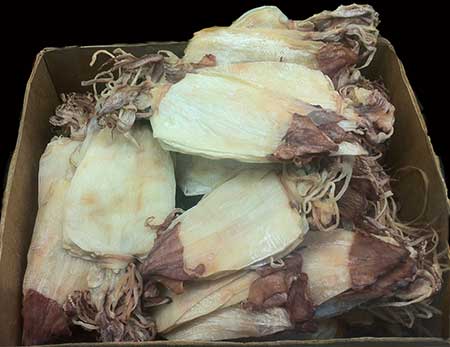 Dried Squid, often found in Asian markets, is a superb ingredient when used sparingly to start a sweet and delicate dashi broth.

Though rather expensive by the pound, keep in mind that you only need a very small piece of dried squid to add enormous amounts of subtle and inimitable depth to your next seafood stock. Dried squid is both far more delicate and healthy to use than dried shrimp powders which are often unsustainable, unhealthy, and unregulated products. Subtle Seafood stocks containing dried squid sake, ginger, Kombu, Dried radishes, and Bok Choy are warming and deeply satisfying during the winter months.

The following is a basic recipe for Red Pepper Squid. For this dish you’ll be using fresh or defrosted squid. Remember to first clean the squid thoroughly and drying it well before cutting it into bite-sized strips for the wok. Keep in mind that frozen squid must be completely thawed or it will exude water when cooking and stew rather than fry. Add the oil to the wok and set over medium heat. Stir-fry the garlic until lightly golden and then quickly add the squid and stir. Add the other ingredients and stir-fry for a couple of minutes until the squid turns white. Garnish with cilantro and toasted sesame seeds and serve with stir-fried young pea greens and brown rice.