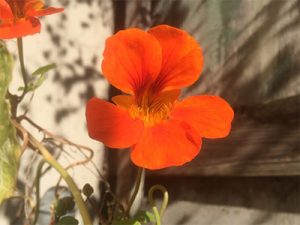 Nasturtiums are indigenous to Peru where they were prized by the Incas as both a vegetable and a medicine. Always eager garden volunteers, Nasturtiums will make their home in any garden that offers them sufficient water, sunlight, and drainage.

Though “Nose-twister“), is the direct translation of its Latinate name, Nasturtium, the Swedish botanist Carl Linnaeus dubbed the flower Tropaeolum Majus.

He claimed the unopened buds were reminiscent of the trophy poles (tropaeum) the ancient Romans would raised in public squares and draped with the captured armor of their enemies. 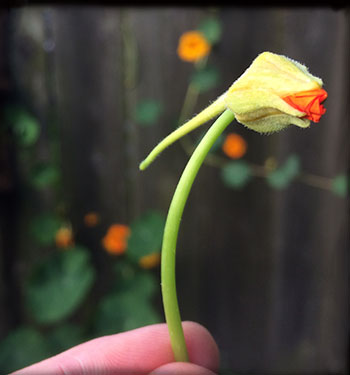 Nasturtiums also contain ample vitamin A and C as well as mustard oil with its antibiotic, anti-fungal, and anti-viral properties. 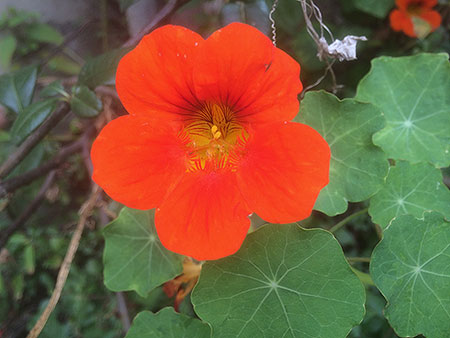 The colorful flowers also offer more Lutein by weight than any other vegetable. Lutein is the pigment found in carrots that is known to improve eyesight. 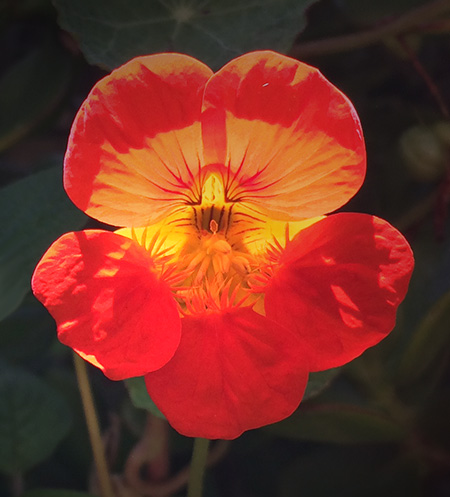 Garden writer Buckner Hollingsworth, in her Flower Chronicles, refers to a “Mr.Trimmer” who reportedly spied “luminescent scintillations” shimmering over his Nasturtiums. Ina magnanimous attempt to defend Trimmer’s vision (and perhaps his sobriety), Hollingsworth cites Erasmus Darwin, grandfather of Charles, who also  claimed to have witnessed “an electric lustre” emanating from the flowers.

Always endeavor to gather your Nasturtiums early in the day when they are teeming with vigor and sharpest in flavor. The goal is to seek out the nascent buds, young flowers, and a few of the tender leaves to adorn your salads. 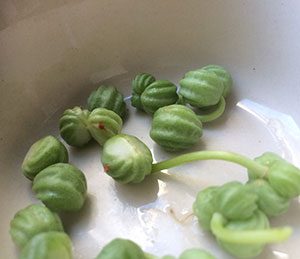 You can also preserve the deco-style Nasturtium pods in a shallow dish of apple cider vinegar and salt. After just a night or two in the refrigerator they become delightful “Nasturtium Capers”, perfect to add a touch of piquancy to your next Potato salad.