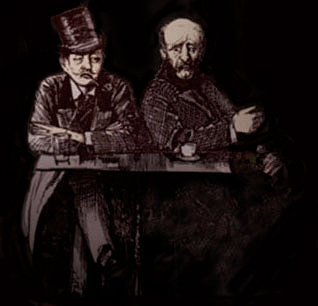 The Boulevardier is a variant of the cocktail known as the Negroni, which itself is simply a ginned-up version of an Americano, or what Americans living in Italy were drinking when they added sparkling water to a Milano-Torino, the classic aperitivo that paired bitter Campari from Milano, with sweet Martini & Rossi vermouth from Torino.

The Negroni was originally invented by an Italian count who decided to reanimate the watered down American cocktail by nixing the fizz and adding some gin to the mix.

Years later the drink was re-colonized by an American expat publisher of a Parisian literary magazine called The Boulevardier. The publisher opted to use Bourbon in his Negroni instead of the gin, and the cocktail now known as a Boulevardier was born.

Interestingly, Bourbon actually helps to revive some of the intriguing woodsy herbal notes found in the original Milano-Torino diluted by the seltzer.

Stir well with ice in a mixing glass, strain into a chilled glass,
and garnish with an orange slice or lemon twist.

*In French, a Boulevardier is someone seen on the fashionable boulevards. A “man about town”, so to speak.