Some say Craft Distillers Master Distiller Hubert Germain-Robin and his partner Ansley Coale produce the finest alembic (pot-still) brandies on the planet. For eight generations the Germain-Robin family produced world-class brandies in France’s Cognac region.Then, about thirty years ago, they sold their operation to the cognac-producing conglomerate Martell, and Hubert emigrated to Mendocino County where he began to use time-honored hand-distillation methods on the areas remarkable fruit. Over the succeeding years, Germain-Robin has crafted some truly exalted distillations and specialty liqueurs. Anno Domini being one of his most celebrated. To a melange of aged brandies made mostly from Pinot Noir varietals, he included some made from old-vine Palomino (typically used to produce sherry. This lent the spirit a soft creamy quality.

Another superlative spirit crafted by Germain-Robin was his Creme de Poete Aged for several decades before it was released, pear brandy was rarefied in the barrel with infusions of dried fruit essences derived from apricots, papayas, and prunes.

Other flavors and aromas were imparted to the brandy with macerations of nuts and sandalwood. The result was a complex and delicate liqueur that Germain-Robin call an “accumulation of ideas”.

Today his former apprentice Crispin Cain, who has been absinthe-minded for the last eighteen years, has taken an old family recipe for apple-honey mead to distill, in small batches, on the original Germain-Robin pot still. Cain first macerates various herbs into the brandy: rose, geranium, lemon balm, wormwood, hyssop, lemon verbena, star anise, fennel seed, mint, and lemon peel, to name a few. He then distills brandy and herbs together to create a subtle and variegated spirit called Absinthe Superieure. 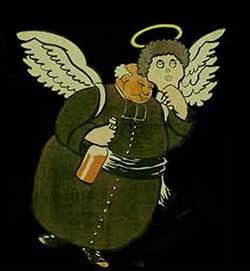