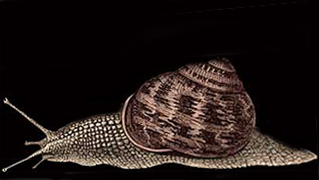 Considered a tasty tidbit since the late Neolithic, the first written recipe for garden snails (helix aspersa) in Europe appeared in France around 1390. Yet wasn’t until the 16th century, when the Catholic Church classified snails (along with frogs and turtles) as “fish”, allowing them to be eaten on meatless days, that snails became popular with French aristocrats. 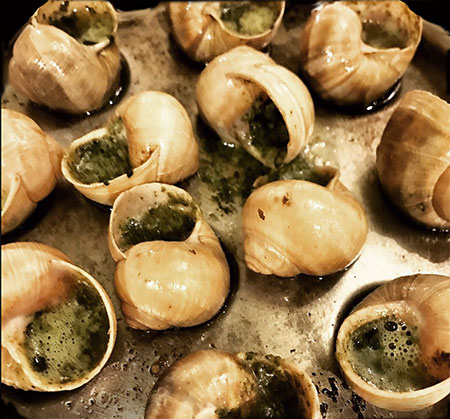 During the 17th and 18th centuries snail-popularity shriveled. It was only when Alsatians poularized them on the menus of early 19th century brasseries that snails once again reclaimed their celebrity culinary status.

If you live in the United States, the snails currently gorging on your garden are undoubtedly of European origin. Their forebears were imported by French gastronomes of the early 19th century who thought Americans would soon come to appreciate their delicacy. To their  dismay American demand for escargot never materialized and entire escargatoires were put out to pasture in backyards across America… where they have remained ever since.

Surprisingly, a second brief “Snail Boom” occured in Northern California around the turn of the last century as Bay Area chefs from Europe began to offer their wealthy young tech patrons old-world fare. A cottage industry of snail-farming arose at the time saw annual revenues slide past the $300 million mark. But when the Dot-com boom went bust, so did the budding demand for snails. Today ,California’s garden gastropods live long and peaceful lives in the pleasant twilight of their culinary disregard.