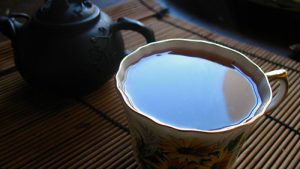 Throughout the world tea the appreciation of tea is prized as one of life’s essentials joys. In China, According to The Book of Tea, during the eighth century, drinking tea was considered one of the “polite amusements”, a pursuit akin to poetry. In Tibet, there is a distance called a “cup of tea” defined as the length that one can walk with a cup of hot tea in one’s hand before it cools down sufficiently to drink.

Key to tea-culture are the subtle “Applied Arts” involved in its preparation. According to San Francisco tea-maven James Norwood Pratt, author of a New Tea Lovers Treasury, they involve “not just what you behold but what you hold”, and teach us to enjoy an “intimacy with objects” that helps focus our attention and broaden our sensual dimension.

The Chinese symbol for drinking tea is three mouths, reminding us that one tastes tea in three steps: first, paying attention to the tip of the tongue to judge sweetness; then to the middle of the tongue for tartness; and finally to the back of the tongue for bitterness.

Fine tea has a “return flavor” which is experienced about a half minute after one sips.This is the moment when the active but subtle elements in the tea have had a time to enliven in the mouth and become perceptible as taste. Tea mavens tell us that it is by cultivating stillness that we can learn to apprehend deeper levels of subtlety in taste. 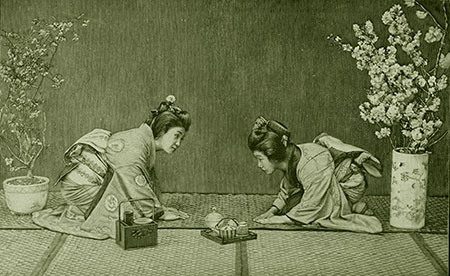 Tea-masters also speak of the cultivation of humility. An art, so they say, that lies less in  how we prepare the tea, and more in how we prepare ourselves for drinking.

Kakuzo Okakura, in “The Book of Tea” writes:

“Teaism is a cult founded on the adoration of the beautiful among the sordid facts of everyday existence. The heaven of modern humanity is shattered in the Cyclopean struggle for wealth and power. The world is groping in the shadow of egotism and vulgarity. Knowledge is bought through a bad conscience, benevolence practiced for the sake of utility. East and West, like two dragons tossed in a sea of ferment, in vain strive to regain the jewel of life. We await the great Avatar. Meanwhile, let’s have a sip of tea.”